On a Saturday in December 1967, a young man went down to his local record shop in London called ‘One Stop Records’. On this Saturday in question the young man had gone to buy Donovan’s new album ‘A Gift From a Flower to a Garden’. As he queued to pay, he glanced around at the people behind him and saw Michael Caine patiently waiting his turn, holding the album ‘Forever Changes’ by Love.

This album was released by Elektra Records on 1st November 1967 and this month will be its 50th anniversary. ‘Forever Changes’ failed to achieve commercial success when it was first released, but has gone on to be recognized as one of the greatest albums ever made.

Upon its release the Los Angeles Times wrote, “The album can survive endless listening with no diminishing either of power or of freshness”, while noting “…parts of the album are beautiful; others are disturbingly ugly, reflections of the pop movement towards realism”.

‘Forever Changes’ has a musical background of lush orchestral string arrangements and mariachi style brass accompaniment. It manages to effortlessly move between haunting beauty one moment and eerie darkness the next, combined with Arthur Lee’s surreal, unsettling lyrics such as “Sitting on a hillside watching all the people die / I’ll feel much better on the other side” you have unique album like no other.

I first discovered the album whilst studying at art college and soon fell under its intoxicating spell. I have discovered it’s an album that once you fall in love with, the love lasts a lifetime. One of the enduring themes within the album is its exploration of the human condition. It touches on themes of life, death, beauty and time.

One of the central Buddhist teachings is that all things are impermanent and subject to change and flux. Simply stated, nothing in the world around us or our self is fixed or solid. There are no things, just process and flux. There is no fixed unchanging centre in any object in our experience. Unfortunately, we suffer and experience difficulties in life because we perceive the world around us as solid, looking for stability where there is none.

Discovering these Buddhist teachings on impermanence and this vision of life as flowing change and process, rather than something solid and permanent was for me, exciting and profound it was as if Buddhism was articulating something I intuitively sensed in the world, but was not able to articulate.  What I love about ‘Forever Changes’ is that within the medium of a rock album, we encounter similar profound insights on life that can be found in the teachings of Buddhism.

Sometimes within popular culture we can find genuine works of art that have the ability to change our lives for the better. ‘Forever Changes’ is I feel, one such work of art and it is just as relevant today as it was in 1967. 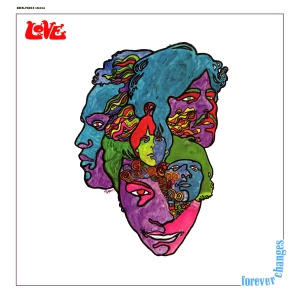